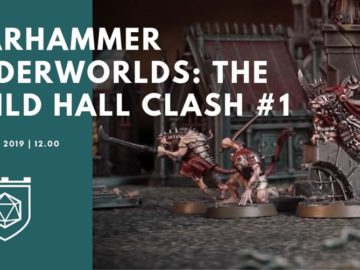 We are thrilled to announce the first ever Warhammer Underworlds: Clash event in Romania will take place at The Guild Hall on June 22nd!

If you’re interested in participating in the ultimate miniatures competitive game with the coolest community, then read on!

What is needed to participate?

– You must own a Warhammer Underworlds game board. If you do not own one, don’t fret, we have some boards to spare.
– A Warhammer Underworlds warband that has miniatures included, since they are required to play.
– Underworlds Dice
– A deck of a minimum of 32 cards split between 12 Objective and 20 Power Cards that will follow the official Restricted & Banned card list > > > https://whc-cdn.games-workshop.com/…/warhammer-underworlds-…

And now let us announce drum roll, the prizes!

ALL participants will receive a set of exclusive tokens!

However, let’s get to the big prizes!

Faneway Victor – The winner of the tournament will receive this Achievement alongside a Warhammer Underworlds: Shadeglass Trophy, exclusive tokens, 3x alternative artwork Ploys

Faneway Fashionables – The best painted warband will be voted by players (they can’t vote for themselves) will receive an Art Frame, 3x exclusive art Ploy cards, a set of exclusive tokens

Faneway Conqueror – The player that earns the highest number of Glory Points in a single game will receive a set of Warband Exclusive Collectible Cards, exclusive tokens and 1x exclusive art Ploy card

Participating in this tournament is easy. All you have to do is to:

Confirm your participation ONE day before the event and have the the 40 RON entry fee paid at the tournament location on the day of the event.

The entry fee will also cover coffee, tea & water. Other beverages and snacks are available at the vendor inside.

Good luck! You have one month and counting!