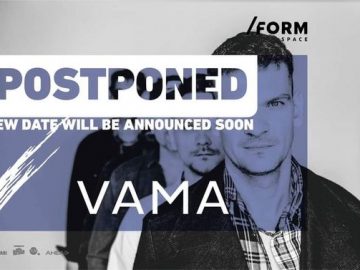 ‼️ The event is POSTPONED ‼️
New date to be announced soon.
_______________________
VAMA is a Romanian pop-rock band whose output runs the gamut from music-hall and indie rock to electro and blues. This eclecticism is the product of the band members’ dazzlingly wide range of musical influences and education.

Tudor Chirilă (vocals) is an actor, co-writer of a rock opera, he writes all the band’s lyrics and he is influenced by various artists’ concept albums. Eugen Caminschi (guitar) and Gelu Ionescu (keyboard) are bluesmen of long pedigree. Ionescu has also produced pop, dance and Eurodance. With an impressive musical education, Dan “Prepe” Opriş (bass) flirts with glam-pop as a songwriter and producer. Lucian “Clopo” Cioargă (drums) has provided rhythm in myriad pop, blues and classic rock projects. This diversity makes it impossible for the band to stick to just one style, meaning that VAMA records are always remarkable for their fascinatingly dynamic tracklist.
The band’s forte is perhaps its live shows. VAMA are at their happiest on stage: the guys are highly experienced instrumentalists and Chirilă imbues their performances with the showmanship and stagecraft that only an actor can bring. The group has been performing in its current line-up for a decade, so the members enjoy an easy familiarity and longstanding chemistry with each other. Their unorthodox and eclectic compositions and stylistic approaches mean that VAMA concerts always surprise the fans. The band might segue from a classic drum solo to an EDM intermezzo, or from a Stones-esque guitar riff to a piece of mysterious electro-pop. You could close your eyes and drift off to the cosmic sounds of a vocoder, only to be brusquely brought back to your senses by a voice booming through a megaphone.