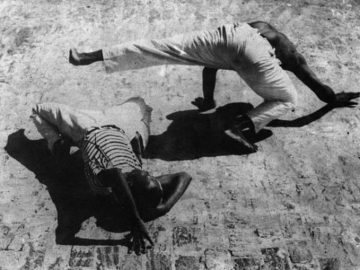 [EN]
Capoeira Angola is an Afro-Brazilian popular culture manifestation. As a communitary form of expression, Capoeira Angola combines music, dance and often acrobatics, being much more than a sport or martial art, as it is often described. Its traditions enclose an elevated sense of community and human coexistance. At Cercul Întreg – supported by the philosophy of Mestre Lua and his Movimento Nigolo – the approach to Capoeira Angola is one of inclusion, welcoming participants of all ages and backgrounds, aiming at an atmosphere free of hierarchical patterns, sexism, competition or violence.
To start practicing Capoeira Angola you will need no previous knowledge of it, nor any specific physical condition. You will quickly get acquainted to musical instruments such as the berimbau, pandeiro and agogô, as well as to various popular musical traditions in Brazil. You will move, dance, play and sing.
Bring comfortable clothes/shoes and a bottle of water.

*If you are interested in Capoeira Angola but feel you can’t contribute with these sums, please talk to us openly and sincerely so we can find a solution.