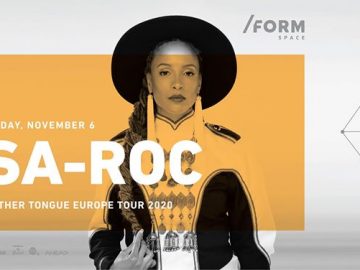 Sa-Roc The MC hails from the southeastern area of Washington DC, a city that’s a mashup of poverty stricken hoods, a strong radical movement, and a fierce loyalty to cultural preservation. This is the cocoon from which Saroc was birthed and bred. Sa-Roc has recorded songs with Jay Electronica, Nappy Roots, Afrika Bambataa and Stic.man of Dead Prez.

A product of Afrikan-centered parents, Saroc developed a rebel mentality from an early age. She grew up on the music of Jimi Hendrix, Gil Scott Heron, and Earth,Wind & Fire. Her musical soundtrack was a klash of sounds, from gogo, to rock, to hip hop. This foundation began an aural quest for different sounds and concepts in music. It wasn’t until 2002, when Sa-Roc met Atlanta producer Sol Messiah, that she began her love affair with the mic.