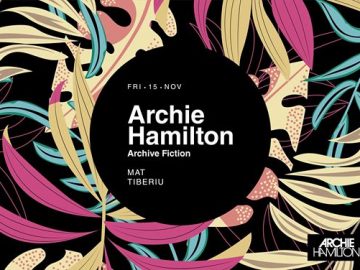 Archie has had a remarkable rise up through the ranks of the underground house and techno scene to being one of the most respected artists in his genre.

Working across many of the facets of electronic music, Archie’s penchant for rugged basslines and ethereal atmospherics form his signature sound. A dynamic selector, an accomplished producer and an influential label owner who has spent 10 years managing A&R for his two imprints Moscow Records and Moss Co. on top of Arkityp imprint alongside fellow selector and contemporary Rossko.

Archie launched his first label Moscow Records a decade ago in 2009 as an output for his early productions. Whilst mastering his craft and cutting his teeth in the studio over ten years culminated in Archie reaching the milestone of releasing his debut album ‘Archive Fiction’ this summer.

The album has not only further cemented Archie’s standing as one of the most exciting UK breakthrough artists but this year has marked the start of his new artistic evolution. Off the back of the album success, Archie’s also launched his three-part ‘Archive Fiction’ tour this Autumn which will run worldwide until March 2020

His addiction towards electronic music is fulfilling him a dream, the dream of sharing this kind of music to the world. The first contact in this direction happend in 2005 in his hometown, where he performed as a resident dj for a good period of time. Also, during this time he was invited to many other parties, including abroad.

The past few years have been found sharing the desk with important names like Cezar, Lizz, Cosmjn,Incolor,Milea,Paul K. Also playing at important festivals like Chronic Love,Untold ,MOX,Airfield. Usually the dynamic rhythm describes him perfectlyhis vision of set.

Their style is groovy, a perfect mixture between deep house and tech-house / techno, always delivering fresh sets & positive energy. They have played in some of the most popular venues in Romania, and their sets are always very well-received by the public.