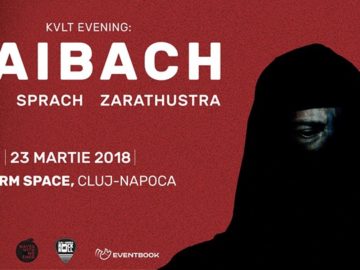 Laibach is a music and cross-media group from Slovenia established on the 1st of June, 1980 in Trbovlje. The name of the band is the historic German version of the name Slovenia’s capital Ljubljana. From the start Laibach has developed a “Gesamtkunstwerk” – multi-disciplinary art practice in all fields ranging from popular culture to art (collages, photo-copies, posters, graphics, paintings, videos, installations, concerts and performances).

Since their beginnings the group was associated and surrounded with controversy, provoking strong reactions from political authorities of former Yugoslavia and in particular in the Socialist Republic of Slovenia. Their militaristic self-stylisation, propagandist manifestos and totalitarian statements have raised many debates on their actual artistic and political positioning. Many important theorists, among them Boris Groys and Slavoj Žižek, have discussed the Laibach phenomenon both from an analytical as well as critical cultural point of view.

The main elements of Laibach’s varied practices are: strong references to avant-garde art history, nazi-kunst and socialist realism for their production of visual art, de-individualisation in their public performances as an anonymous quartet dressed in uniforms, conceptual proclamations, and forceful sonic stage performances – mainly labelled as industrial (pop) music. Laibach is practicing collective work, dismantling individual authorship and establishing the principle of hyper-identification. In 1983 they have invented and defined the historic term ‘retro-avant-garde’.

They creatively questioned artistic ‘quotation’, appropriation, re-contextualisation, copyright and copy-left. Although starting out as both an art and music collective, Laibach became internationally renowned foremost on the music scene, particularly with their unique cover-versions and interpretations of hits by Queen, the Rolling Stones, the Beatles, etc.

In 1984 Laibach initiated the founding of the wider collective of NSK (Neue Slowenische Kunst) together with the painters from the group Irwin and the theatre group Scipion Nasice Sisters. This led to the establishment of a strong platform for social, cultural and political activity within the climate of liberalisation and pluralisation in 1980’s Yugoslavia. NSK existed as a synchronised movement till 1992, later partly changing itself into a virtual NSK State in time. Limited collaboration between the groups continued till 1995 and beyond.

After the break-up of Yugoslavia in 199, Laibach continued mostly within the realm of popular music, while remaining a point of reference in terms of artistic cultural criticism. During recent years the group underwent an international re-evaluation of their artistic practice in the course of an emergence of post-structuralist views on worldwide conceptual art production.