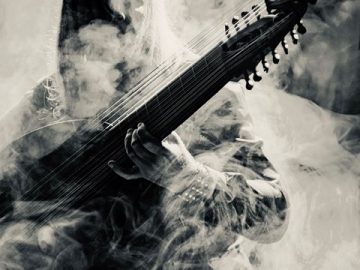 „Van Wissem is possibly the best known lute player in the western world. To get into Jozef Van Wissem’s world is to surrender to the inevitability – and timelessness – of a strange music created at its own pace, in a manner wholly of its creator’s making. Brevity, simplicity, directness is the key.” (Quietus)

Van Wissem has fully emancipated the Lute in a non-classical setting and used it in film soundtracks, video games, contemporary dance etc. He has performed over 1200 solo lute concerts in churches and at concert venues around the world, including prestigious rock festivals like ATP and Primavera Sound, playing his all black, one-of-a-kind baroque lute custom build for him. In 2013 he won the Cannes Soundtrack Award for best score at the Cannes Film Festival for „Only Lovers Left Alive”.

In May he will be releasing his latest album „Ex Mortis” in Romania. Right after the launch at Control Club Bucharest, Jozef Van Wissem will be coming to Cinema ARTA on the 16th for an unforgettable live show.