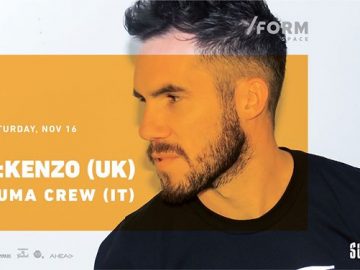 J:KENZO is a producer and record label owner (Artikal Music & Lion Charge) from the UK. Known for his minimalistic dark tribal sound in the both the dubstep and drum and bass scenes since 2006.

Well known as a DJ touring worldwide and Rinse FM resident; he is a taste-maker and consistently at the forefront of underground bass music.

J:KENZO has produced multiple EPs and singles as well as a self titled full length album, whilst also remixing several notable artists; appeared on labels such as Exit Records, Metalheadz, Tempa, Cosmic Bridge, 31 Recordings, as well as his own label Artikal Music, often bridging the gap between dubstep and drum & bass.

Numa Crew is a collective of djs, producers and one MC, pioneers of the Italian dubstep scene and one of the landmarks of the national independent music scene. Their musical research focuses on bass music, with influences that range from dub & reggae to hip hop and UK underground music.