Eats Everything | Coyu at Midi 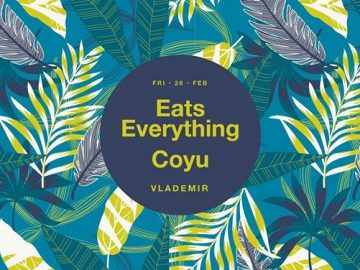 Few producers in the history of dance music have made such a rapid and far-reaching impact on the electronic music scene as Eats Everything aka Daniel Pearce. This larger-than-life beat maker is at the forefront of a swathe of talented producers to come out of the West Country Bass Epicentre known as Bristol, defining an entirely new strand of forward-thinking underground music.

With work on his own Edible imprint, a relentless touring schedule trotting around the globe and his own Edible movement, Eats Everything continues to prove himself as one of the UK’s finest dance music exports.

‘The Big Cat’, Catalan DJ/producer better known internationally as COYU is the priest of the Suara house and techno temple which is without a doubt one of the most prominent imprints in the worldwide electronic music scene, reached #1 on both Beatport and Resident Advisor.

The worldwide clubbing music scene has surrendered to Coyu’s performances. He recruited fans from every corner of the globe, playing at venues and festivals such as Sónar, Piknic Electronik, Supersonic (India), Ultra Music Festival, Boiler Room, Ministry Of Sound, ETC.