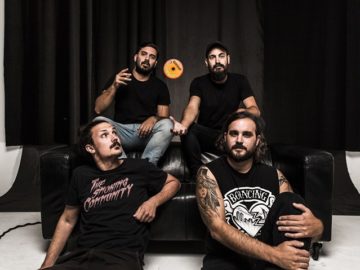 Having risen from smokey basements to packed arenas, children of the now-legendary Greek underground heavy rock scene of the mid 00’s, 1000mods can be considered no less than the most successful Greek rock band of the past decade.

Deriving equally from the 70’s (not only songwriting-wise but also due to their love for vintage equipment and analogue sound) and the glorious 90’s, they never hesitated to blend all their influences (from retro-rock and doom rock, to fuzzy heavy rock and space rock, even the grunge and alternative scene) creating a unique recipe of explosive heavy music that’s impossible to imitate.

1000mods offer inspired, powerful and uniquely fresh heavy tunes, satisfying everyone from stoners to metalheads, for over a decade now.

It was September of 2011, when “Super Van Vacation” paved the way. The debut full length album of the Greek heavy rock rollercoaster had it all: Heavy low-end guitars, laid-back groovy-as-fuck rhythm section and trippy vocal lines, resulting in what is now considered to be a classic for the European heavy rock scene, as well as a game-changer for Greek rock music which would never be the same again. Bands and fans came and go but 1000mods stood strong, following their dream, leading by example and inspiring an entire generation of musicians.

Their second album, titled “Vultures” (2014), continued the “Super Van Vacation” legacy, consisting of some of the band’s most thick grooves to date, as well as the elements that would later be used as raw material for the creation of their unique personalized sound. A sacred pact was cast in stone: The Greek scene would take over and 1000mods would lead the way to it!
With an ever-growing fan base all around the globe, taking repeatedly European soil by force, due to their relentless touring schedule (having also participated in the biggest European rock & metal festivals), armed with dedication and non-stop commitment, the Greek heavy rock quartet is fairly considered to be the new-found power of the European (some say “worldwide”) heavy rock scene.

Praised by fans, as well as by heavy traffic music media outlets around the globe, their latest release “Repeated exposure to…” (2016) was considered by many as a masterpiece of the heavy rock scene, and is strongly rumored to be one of the albums that changed the face of European heavy rock music, once and for all.
“With their third full-length, Repeated Exposure To…, Greece’s 1000mods affirm their place at the head of the pack of European heavy rock and roll. I mean that without qualification. Not just Greek heavy, but Europe as a whole.” says the Obelisk.

Having lately expanded their fame in the US, touring successfully for 35 days, and currently setting ground for their first ever Australian invasion, 1000mods are said by many to be on the verge of their mighty breakthrough! Being extraordinarily explosive on stage and always delivering material of high quality on record, as far as both songwriting and sound production is concerned, it’s no surprise that 1000mods have managed to create a core of die-hard fans that only grows bigger day-by-day.

Heavier than life, psychedelic, trippy, hauntingly melodic and dangerously addictive, 1000mods will surely groove your body, take violently your mind off things and occasionally give you chills down your spine.